Social Media is Whack-a-Mole for Police 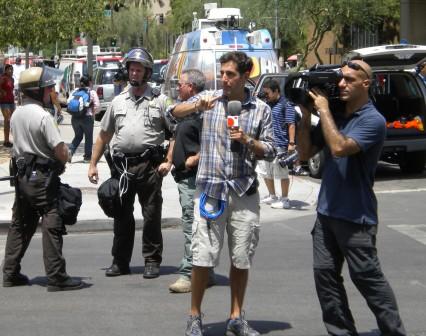 PHOENIX – Police, sheriffs and public safety agencies increasingly use social media to communicate with the public and news media. New programs, apps and technologies are popping up everywhere. Many departments feel like social media is a game of whack-a-mole for police.

Everyday police executives, supervisors, public information officers (PIO) and social media officers are inundated with Facebook and Twitter posts, blogs, comments, photos and videos. Most of the time, little or no action is required but other times a simple comment, photo or short video will lead hours of work in response.

Albuquerque Police learned recently how a few words on Facebook can become a national story. An officer involved in an on-duty shooting became the story when a reporter discovered the officer’s Facebook profile listed his occupation as “human waste disposal.”

Detroit Police Department had to remind officers about their code of conduct and confidentiality as it relates to sites like Facebook, Twitter, YouTube, MySpace and other social media. This happened soon after it was revealed that crime scene photos taken by an officer with a cell phone had been posted online.

There are endless stories across the US and around the world about officer’s inappropriate comments, photos and videos. These items reflect negatively on the officers involved, the agencies that they represent and most importantly impact the confidence of the public that they serve.

Law enforcement agencies will likely be playing whack-a-mole for a while. It’s imperative that they prioritize Police Social Media and Police Media Relations and recognize its value in communicating more directly with the public they serve. They’ll need Police Social Media training, cutting-edge technology and updated social media policies.