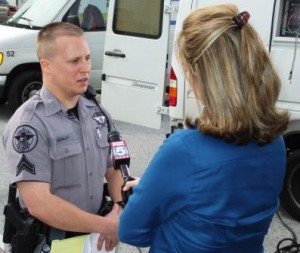 PHOENIX — Social networking has become one of the primary forms of communication and interaction in contemporary society. Police Social Media provides law enforcement agencies an opportunity to achieve their goals of communicating with a more socially connected community. Emerging technologies such as social networking websites, blogs and podcasts aid law enforcement agencies and their officers in communicating and marketing their services and activities to communities that they serve. New forms of social media can also be used to educate young people and the general public in efforts to fight and prevent crime.

Facebook, Twitter and other social media sites are marketed and used by all age groups, but a large percentage are in the coveted 16-25 year old age bracket. This group is  traditionally the hardest for law enforcement officials to communicate and establish relationships with  By utilizing social media and other cutting-edge technologies, law officers can maintain a more healthy dialogue and understanding of teens and young adults with whom they’ve previously had minimal interaction.

Police agencies can use social networking for crisis communications or emergency preparedness to reach community members quickly and efficiently. For example, if an urgent message regarding a missing person, child abduction or robbery suspect on the loose needs to be communicated to the public, these social networking sites become an effective and invaluable tool that enables them to get information out within seconds.

Social networking sites also create a space for police officers to share information about themselves with the public. If law officers utilize these sites to explain aspects of their job and feelings about their work with their community, it potentially narrows the space between police and the people they serve. MySpace, Facebook and other social media profiles often help bring law enforcement professionals and community members closer together.

Social media is also an invaluable tool for educating the public. Anything from crime reports to crime prevention tips, traffic updates, severe weather updates or safety advice can be transmitted to the public quickly and efficiently. Furthermore, law enforcement officers can use these media connections to keep the public informed about unsolved crimes and post valuable information such as surveillance videos on the web. With every community member that receives this information they are increasing their chances of solving these crimes and putting criminals behind bars.

Other ways that social media can be utilized to fight crime is assisting law enforcement officers to intervene before crimes even happen. Unfortunately, many child predators and sex offenders are also utilizing social media as a tool. There are numerous cases of offenders using social networking sites to locate potential victims and initiate contact with them. The presence of a community law official as one of a teen’s friends or contacts on Facebook may be able to deter a potential child predator.

Social media and social networking has both positive and negative effects on communities. Social media offers police officers an outlet to communicate with and educate the public, as well as form relationships with community members and fight crime. By embracing the positive benefits that social media offers, law enforcement agencies and police officers can perpetuate the positive benefits and help to decrease the negative aspects.